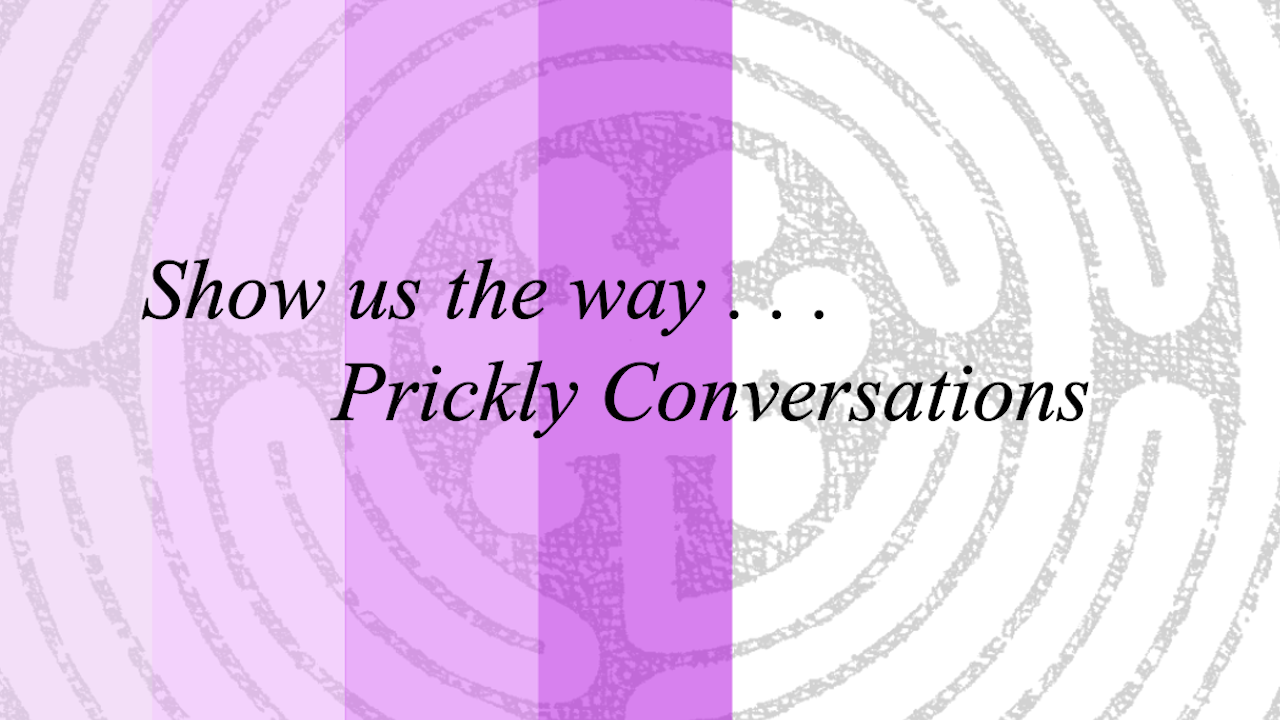 “For God so loved the world that God gave God’s only Son, so that everyone who believes in him may not perish but may have eternal life.”

We know this verse well, don’t we? I mean, after all, it is the most often quoted verse in American Christendom. When I was a child growing up, I thought it pretty much summed up everything there is to know about being a Christian. It was all just right there, that simple. But with time I figured out, hmm wait a minute, there was more than one way to view this verse. This verse, this one statement, seemed to hold way too much power. I mean, was it about God’s inclusive love or was it more a matter of sorting out the unbelievers from the believers? Or maybe neither was the intended idea at all.

You see, a sticking point that we tend to get a little too hung up on is that phrase “should not perish, but have eternal life.” We often associate eternal life with what happens beyond the grave. We get too hung up on that, yet that’s not at all what John was talking about. You see, in Jesus’ day, religious folk saw time divided between the current age, an age of struggle, and what was yet to come, the new age when there would be peace and prosperity. You know, streets of gold, things like that.

Through the years, we Christians have become a little too focused on that idea, that eternal life is what’s promised in the sweet by and by. And yet, that’s not the intention when we see eternal life in the book of John. No, no. John wants us to know that the belief in Jesus brings the richness of the New Age bursting into the present. Jesus tells us that God’s love makes all the difference in the eternal now.

So, of course taking any one sentence out of context in any case is dangerous. We don’t want to do that, and yet we tend to do that with the Bible all the time. So, this verse, which embraces the whole world surely was never intended to be kept in isolation. So, I invite you to consider what comes before and even what comes after these well-known words “For God so loved the world.” Let’s think about what it really means. What’s the bigger message?

You see, in John chapter 3, it begins with a rather prickly conversation between a Pharisee and a young, hot-shot Rabbi. The Pharisee Nicodemus has decided he’s tired of hearing about the Rabbi Jesus. He’s going to go talk to him directly and see what this “man sent from God” is all about. Seemingly, so far so good, Nicodemus goes to the source for information. Jesus, however, doesn’t greet him with welcome. It’s more a matter of: please, not one more question for today. It doesn’t take much to figure out in the early verses of John 3, this conversation is going off track in a hurry.

There are likely many more examples throughout history of conversations that needed to take place but went awry than those where productive dialogue really took place. So, what’s the difference in this particular case? We’ll come to that, but let us think, what in our world, our context, is the most fertile soil for these difficult conversations that wind up with hurt and dissension? Social media, isn’t it? Over and over again we see this.

You know, not long ago, a very dear friend of mine—he calls me up and was very troubled and said, “I just want to talk through this situation. I’ve been in this conversation on social media and it didn’t go well.” I’m like, “Okay.” So I listen. Well he tells me that he was in a group context, a group chat, with those that he didn’t know, and there was this one lady that said things that just really bothered him and he just asked her to stop. Just please stop. Well, she did at that moment, but then immediately after the group had finished, she sent him a private message that said “Please can we just talk about this? I really want to know why you didn’t want to hear more of what I had to say.”

Context. The context here is that my friend is a young Black man and a pastor; the woman, much older and white. And the rest of the story, well they never met in person. They live like a thousand miles apart, probably in many regards. There were things that the woman had unwittingly said that were triggers to my friend. He just simply wasn’t ready to deal with what she was saying. He thought her request for a private conversation was not unreasonable. He just needed a little more time to sort things out.

If only patience had prevailed, but when he had not responded within 24 hours, she sent him a big finger-wagging message letting him know her deep disappointment in him. “And after all, you’re a pastor,” she said. Well, if he had felt triggered initially, he certainly did now, and he ripped off a quick message of pointing out all the things he found fault with what she was saying.

Her response was, “I don’t ever want to have any more contact with you”. She blocked him, full stop, no way forward. They were both simply left with a sense of confusion, anger, and hurt; nowhere to go.

You see, timing; timing is really important when it comes to having a difficult or prickly conversation. It helps when we stop to think, what are the other person’s needs? Am I being responsible when I ask them to kind of drop everything and just pay attention to me?

Well this circles back to the conversation between the Pharisee and the Rabbi; Nicodemus and Jesus. You see, Nicodemus shows up at night. Well that makes perfectly good sense to him because he knows that among the Pharisees, these teachers of the law, what Jesus has to say is not well accepted or appreciated. Jesus has a much looser understanding and appreciation of the Law of Moses than what the Pharisees taught. And so Nicodemus feels he is wisely going to go at night to speak to Jesus and learn more about what his message is. Good idea? Seems so from Nicodemus’ standpoint. But let’s think about Jesus. What was he needing at this point? You know, he probably had been pressed by people all day long and now it comes night. And maybe he was just looking forward to the comfort of darkness and not having to answer one more set of questions.

Doesn’t welcome him with open arms, does he? His tone is not “come on in.” Is Jesus suspicious of the Pharisee? Or was he just simply ready to go to bed? This conversation, yeah it was off to a bad start, and Nicodemus brings this sense of urgency by showing up at night, just when Jesus thought he was done for the day. And so Jesus begins by speaking metaphorically, by talking about being “born again” and really kind of shames Nicodemus in the process.

But what was the turning point? What took this conversation from going totally off the rails to being on track and productive? You see, it’s really important when dealing with this kind of context, this prickly conversation, and we’ve got to be willing to listen and consider another person’s perspective even through our own discomfort.

For Nicodemus to show up at all illustrates a level of humility and some degree of openness to what Jesus would share. Jesus pivots the tone of the conversation when he stops to recognize Nicodemus’ genuine confusion. Jesus shifts to straight-talk and acknowledges their differences while also honing in on the fact that they share so much as devout Jewish leaders.

Soon Jesus’ discourse comes to what we know as John 3:16, a particular sentence spoken to a particular person in a particular context. So Jesus identifies himself as the “only Son of God?” These were incredibly heretical words to the ears of a Pharisee. And yet, he emphasized that the Son of God isn’t sent just for those who look or sound like himself or even Nicodemus. In fact, God’s love is for the whole world.

So we fast-forward to what comes after today’s lecture. We look on into John chapter 4, and it’s there that Jesus pushes this idea into reality by insisting that he and the disciples travel through Samaria. Yes! John 3:16 is pointing us to the woman at the well and the millions of faces just like hers that God loves so much.

Samaria was wholly unacceptable territory to the holy men of Jesus’ day. But Jesus doesn’t accept this division and meets the woman where she is on her own turf within her own context. He shares living water with her and eternal life sure enough breaks through the struggle of her present-day and changes everything.

This is, in fact, the same invitation that Jesus made to Nicodemus. “Come out of the dark and into the light.” But Nicodemus, the teacher of Israel, is unsure. He is like a moth drawn to light but he just doesn’t quite know where to land.

Jesus tells him he doesn’t have to perish, doesn’t have to just rot away through life, no—he too can accept the invitation to change. Jesus was likely keenly aware of the status and privilege that Nicodemus would forfeit if he were to follow Jesus and the disciples, but nonetheless, he invites Nicodemus to change his mind, live fully, and join those who embrace the whole world.

And what about us? What does this say to us? Just as the radical Rabbi invited the searching Pharisee, you too are invited into the light to experience eternal life bursting through your present struggle—COVID, isolation, fierce storms both literal and rhetorical have wearied us all and set us on edge. Beloved, know the God who loves each of us so much that God gave his only Son so that we don’t have to die in our differences but instead we too can embrace each other and fully embrace God’s wide world. Amen and Amen!