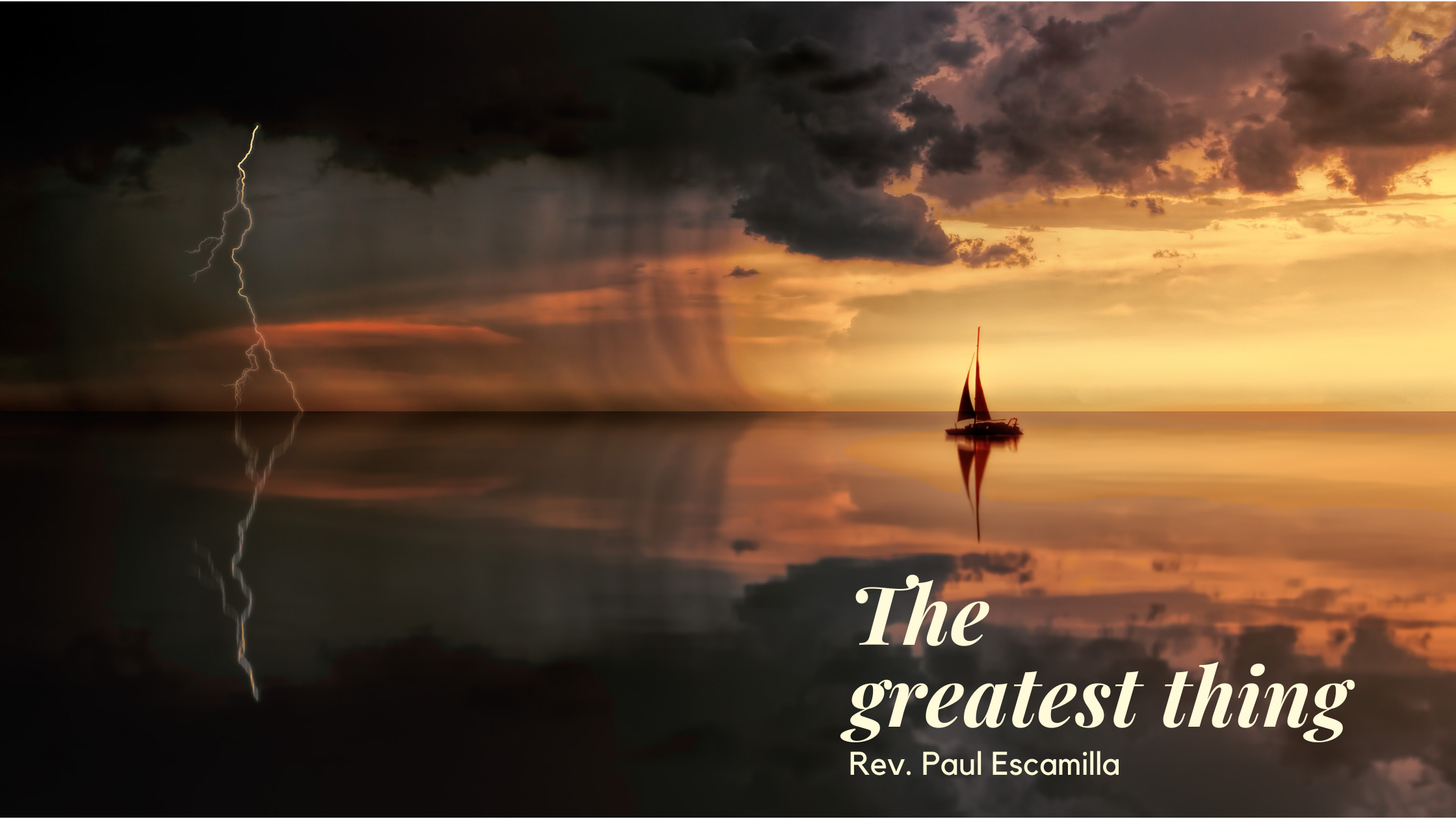 There are three great things in this scene. I don’t mean “great” the way we generally use that word—sort of a free radical that attaches to pretty much any noun in the book. Great pizza, great movie, great party, great trip, great root canal. It might be our most popular adverb, too. How are the kids doing? Great. How’s your summer going? Great. How’s the new job? Just great.

Mark likes the word “great”; but he tends to use it far more sparingly and specifically than we do. So it’s somewhat remarkable that in the short account Steve just read with us the word “great,” mega in Greek, appears three times. Three different things, right in a row, he chooses to describe with that choice word.

The first is a storm; a great storm. Meteorologists would have a heyday with the mercurial weather systems around the Sea of Galilee, which is really not a sea but a very big lake—about sixty-four square miles. Cool winds blow down from the Golan Heights on the east shore, colliding with warm air that rises from the water. When these two meet, the result can be a sudden storm.

We know a little something about being surprised by sudden storms, don’t we? Remember our Valentine’s Day present? A winter storm broadsiding us with extreme cold and snow and ice. We lost power. Lost water. Lost lives. Of course, the biggest storm of the past year did not bring snow and ice and cold. It was a viral storm, claiming over 600,000 lives to date in the U.S., and millions worldwide, indelibly affecting each one of us, our families, our churches, schools, businesses, communities.

In that same time frame we faced a cultural storm in pulling back the curtain of our own history and present with regard to how we treat and mistreat one another relative to our ethnicity, and seeking to come to terms with what that would mean to overcome these patterns. And then there was the storming of our nation’s Capitol, a national disgrace that left us with profound questions about who we all are and how we handle our differences.

We know about storms. We could be in this story. Rembrandt, the 17th century Dutch painter, actually was. He painted this scene of Jesus with the disciples, and included himself in the painting, standing there on the deck of the pitching boat, looking out at us from the canvas, one hand steadying himself on the rigging, the other holding his cap in place against the wind, or maybe he’s signaling to the viewer his bewilderment, as if to say, “What have I gotten myself into, painting myself into this maelstrom?”

And . . . a great calm. Jesus rebukes the wind, and says to the waves, Peace! Be still! Gives new meaning to the phrase, “Be still and know that I am God.” The wind ceases, and there is a great calm.

Three greats in one brief story. from great storm, to great fear, to great calm. That’s all the sermon we need: Three points and a prayer; all done.

Except . . . that’s not the order of things in Mark’s account, is it? This is the sequence: great storm, great calm, great fear. The great fear of the disciples comes after the great calm on the lake. Don’t ask me why.

We’ll have to ask Mark. And he’s likely to say, As much as the disciples are disturbed by the raging sea, there’s something else that truly petrifies them. It is the demonstration of Jesus’ power, his authority, in subduing a great storm into a great calm. This is what brings great fear to the disciples.

In Mark the cloth of devotion is very often woven from threads of faith and uncertainty. Belief and disbelief often coexist. As the gospel unfolds Jesus will prove to be both captivating and perplexing, inspiring in those who choose to follow him both devotion and ambivalence.

A father says to Jesus, I believe; help my unbelief. Witnesses to the resurrection are frightened by faith. And now here. The storm on the lake has moved inside, leaving the disciples pitching and reeling as their boat rests quietly on a glassy sea.

Mark may reveal such a mix of emotions to us to increase the chances that we might see ourselves in the painting, too—drawn to Christ, but also nervous about what deeper discipleship might look like. If this one who rulest wind and water stands by me, he may want to tend to my own tumultuous heart, too—my habits, my choices, my prayer life; my nursed wounds, my cultivated self-absorption; my yearning to be things I’ve never been before, to know a purpose, a power, a presence in my life I never dared to hope for. To say Jesus is Lord of wind and sea, and of my life, too, is to invite that gritty and grace-filled work of spiritual transformation on the way to life in its true abundance.

There’s one more great thing in this story. It isn’t named, but it’s terribly obvious. That is the great trust on the part of the shaken disciples to stay with Jesus anyway, this one whom they have come both to fear and crave. In spite of all, they wish to know him, to follow him, to serve him.

Great storm, great calm, great fear, great trust. Where are you in the sequence? What is the titration of uncertainty and yearning in your relationship with God. Cautiously seeking to draw nearer to God, nearer your true calling; to practice, as my young cousin Rachel would say, more faith than fear.

My friend just lost his father, and in his reminiscences portrayed in one simple story the essence of his father’s love. As a child he would jump in the shallow end of the pool where a few feet away his dad stood waiting to draw him from the water. Climb out; do it again. And again. After a while, he noticed as he was swimming toward his dad that his father’s feet were slowly shuffling backward, just a little, leading his young son further and further toward the deep end, yet always staying close enough to reach out and gather him up.

It’s a beautiful portrait of a good father, lovingly, slowly building confidence and self-assurance in his child. It’s also a helpful portrait, I think, of a disciple of Jesus.

My friend, after all, upon discovering what was going on, continued the little game; climbed back out of the pool and jumped in again, swimming a little further each time, a little deeper, assured that those backward-shuffling feet would stay near enough not just to guide, but to guard.

He was timid at first about going further and further. But he surely felt what we all feel, that he didn’t want to live his whole life in the shallow end of the pool, and he had discovered someone who could lead him deeper.

Today, in the person of Jesus, so have the rest of us.

The Promise of Absence