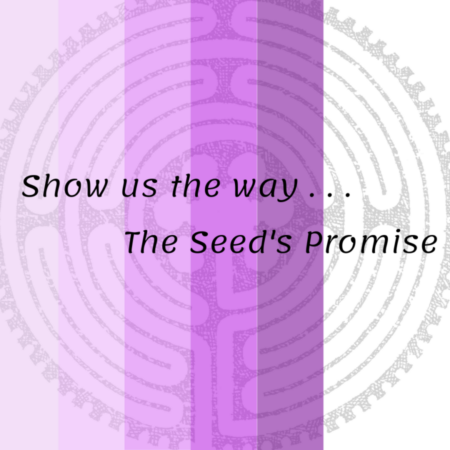 E.B. White was the author of Charlotte’s Web, Stuart Little, and other delightful children’s books. His wife, Katharine, was also a writer. A collection of her essays on gardening, published several years after her death, includes a prologue by her husband, in which he recalls watching his wife of nearly fifty years the autumn before she died planning what was to be the final laying out of her annual bulb garden. Picture it. Through the kitchen window he sees her there in the garden organizing her project. She was, he writes, “absorbed in the implausible notion that there would be yet another spring, oblivious to the ending of her own days which she knew perfectly well was near at hand, sitting there with her detailed chart under those dark skies in the dying days of October, calmly plotting the resurrection.”

Those words could describe Jesus in his final public discourse in the gospel of John. The last thing, we know, is always the most important thing. And in the very last things he says publicly, addressing a motley group of disciples and dabblers, the curious and the committed—in other words, the likes of us—he speaks of his own dying and rising as though he is calmly plotting the resurrection. He says to those gathered there, and to us who overhear, “Unless a seed falls into the earth and dies, it remains alone; but if it dies, it bears much fruit.”

With these fecund words he assures his followers of a certain deep and abiding cluster of promises:

There’s the assurance that while death is real, it is by no means the end of our reality any more than a seed’s being buried in the ground is the end of its reality.

Jesus tells his listeners that from his own death will come new life, both his own, and ours. This mystery is perhaps the greatest we know in our mortal existence—the Easter mystery in the gospel story, and the mystery of resurrection in our own.

In John’s gospel it’s always that way for Jesus. The walls are thin between this world and the next, and Jesus seems to move with ease from one into another and then back, often taking us with him as he goes, with visual descriptions, or experiences, figures of speech, or metaphors like this one, all the while inviting us to trust the promise that, in the words of Thomas Wolfe, there is beyond our senses, our conceiving, our imagining “a land more kind than home, more large than earth.”

Death is real; but life, the more.

Further, with these words, this simple garden variety metaphor, Jesus assures us that the things in life we experience as defeat or disaster are not the end. The promise of the seed is the promise of our faith, however fledging or feeble that faith situates itself inside of us.

If good becomes buried in the dirt of situation or circumstance, ordeal or outright tragedy, violence or hatred, as we’ve seen so painfully this week, good is neither gone nor defeated; but rather emerges from that dark or imprisoned place, nourished by the very dirt that smothered it, buried it, nourished by it—for strength, for leverage, for grounding—pushing up and up and finally into the light of day. Remember Frederick Buechner’s words from last spring: “The worst thing is never the last thing.”

This weekend marks the Equinox in the northern hemisphere, signaling the beginning of spring. More technically, it marks a moment on the calendar when the hours of the day are equally divided between night and day, between winter’s dark and the growing light of spring.

Holy Saturday, that liminal day between Good Friday and Easter, between Jesus’ death and his resurrection, is a “behind us and before us” day as well. Darkness behind, light ahead. Despair behind, promise ahead. In a sense the Spring Equinox, always occurring deep in the season of Lent, is our solar system’s Holy Saturday, marking the dying and rising of the cosmic Christ.

We live so much of our lives in a perennial Holy Saturday, don’t we? Situated between darkness and light, dying and rising, winter and spring. Will I despair, or will I yet hope? Will I fear, or will I seek to trust? Will I shun or will I endeavor to love? Will I condemn or will I choose to forgive? Will I live in shame, or will I allow the grace by which I might accept my own acceptance by God?

This is the time of tension between dying and birth, the poet wrote in a paean to Holy Saturday, or, to the Equinox. With his calm plotting of the resurrection, Jesus makes sure we understand the direction faith leads us is this direction: from dying to birth. The seed is buried in the earth; but not forever. The promise of the seed is not that we will never die; but that will always live anew.
There’s one more thing we find hidden like a seed within this simple verse. Jesus in John is the close companion of all who grieve, offering tender words of assurance and promise with which we so often weave our gatherings to mourn the dead and celebrate their lives. We use his words, these words, about a seed and Jesus must surely have meant in sharing them to assure us that those who go before in death bear fruit in the world they have departed even beyond their dying, leaving us heir to their hopes, their dreams, their virtues, even their failures; their favorite hymns and Bible verses and poem fragments; things done and things left undone but aspired to; their lessons learned, their hurts forgiven or intended to be; their essays on gardening, as it were; which are always, in a sense, essays on living.

They make up a cloud of witnesses—not the kind who watch so much as the kind who gently, quietly speak, usually beneath a whisper. Encouraging us. Steadying us. Teaching us how deeply to turn the spade; how soon to bury the seed; how to water and fuss and tend; and also how not to; how the things we love we have to learn to leave alone.

These we have loved and lost are seeding the beautiful, aren’t they, not only while they lived, but perhaps, perhaps even more after they’re gone.

I’ll never forget the daughter who said to me years ago in the wake of her dear mother’s death, “Somehow I feel even closer to my mother since she died than I did when she lived.”

This past week, I spoke to another who was grieving, a woman who had just lost her husband. “How is the ragged meadow?” I asked her. “Lots of weeds,” she said, “but so, so many beautiful flowers, too.”

In the Laurel Heights columbarium, we find the niches of many beloved friends in Christ who have gone before us in death. Intertwined among those niches and nameplates is a pattern of wheat—leaf and stem and grain.

The image brings to mind many associations; among them surely this one: that those who have died are not gone from us; their gifts remain, they multiply, soften, deepen, become more richly honed and toned with time. The seed falls into the earth and dies, and then bears much fruit beyond.

With eight words and a comma, the writer and faith-traveler Ann Lamott has at one and the same time narrated Jesus’ death and resurrection, reaffirmed the resilience of faith, and assured us of how it is with those who’ve gone before us. She has, in other words, paraphrased John 12:24: Love falls to earth, rises from the ground.

Carry these words, if you will—their balance, their ballast—carry them into the waning days of Lent, into the bright sadness of Holy Week, and the Easter Triduum—Good Friday, Holy Saturday, Easter Sunday. Let us carry these words into our own present strains and stresses of contending between darkness and light—both in our own personal lives and in our world; and might we take these words into an observance of a near or far-off grief that we know, loving and letting go, luxuriating in the replenished gifts of those who’ve gone before.

“Love falls to earth, rises from the ground,” she says as if calmly plotting the resurrection. Jesus too, the seed, falls to the earth, only to rise and bear its fruit.