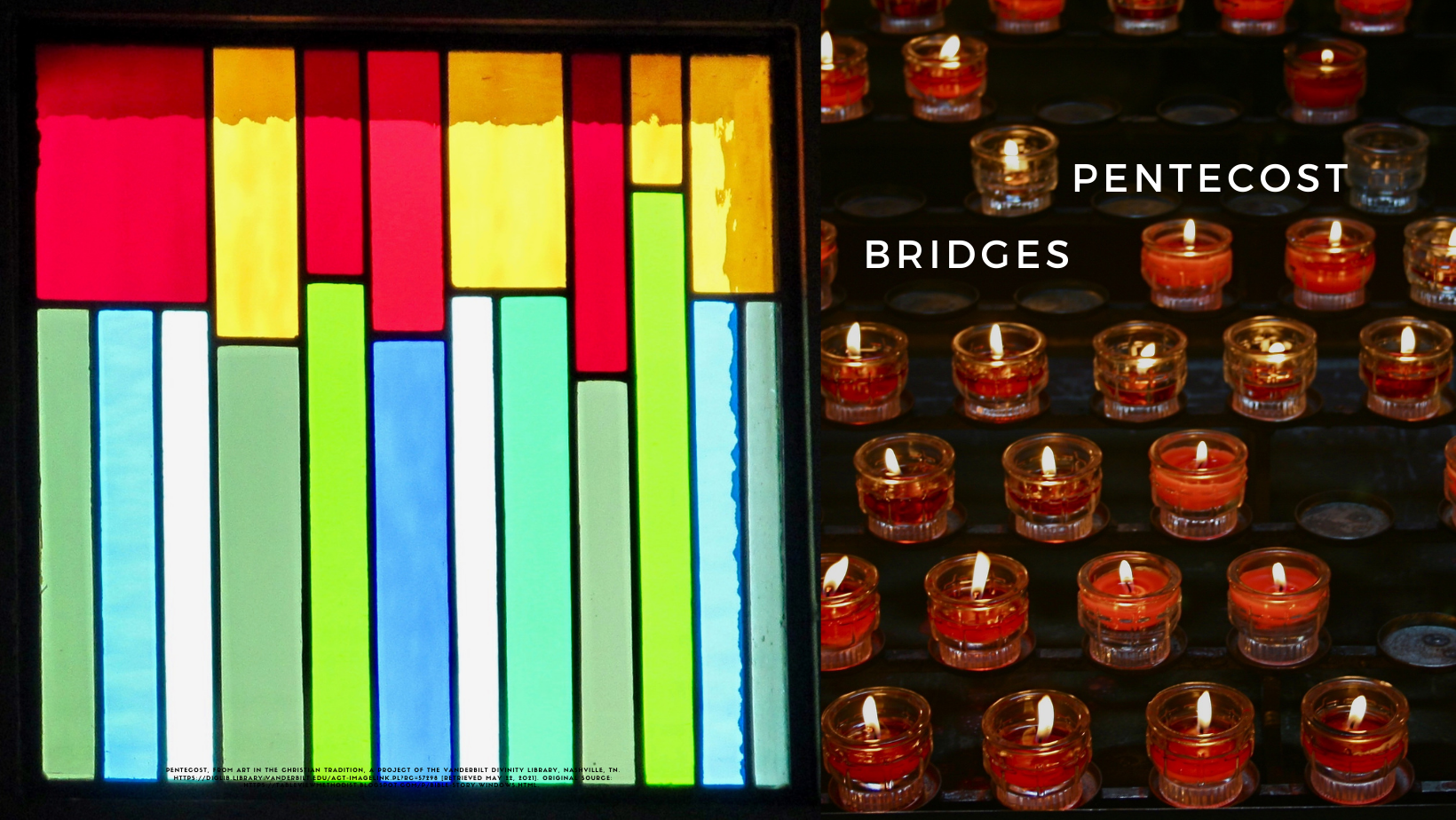 Charlotte’s Web is the beloved story of a spider named Charlotte, a pig named Wilbur, a rat, an old sheep, a lamb, and a goose, all living together in a barnyard.  E. B. White’s magical tale is about the spider and these animals talking to each other, dealing with various dilemmas they faced. We read that book with each of our children when they were growing up. One night after reading a chapter with Anna, I bent down and I asked her, “Anna, do spiders really talk to pigs?” She looked at me like that was the silliest thing she’d ever heard.” “No, Daddy,” she said. “Spiders can only talk to spiders and pigs can only talk to pigs!” Very astute, I thought, for a young child.

And while that may be true in general, and may be our tendency in political discourse lately—elephants communicating exclusively with other elephants, donkeys only with donkeys—there were at least two occasions where that principle didn’t apply: Charlotte’s Web; and the day of Pentecost as recorded in Acts Chapter 2, where we discover a sort of crossover communication that is as remarkable as is fantastical, as the one in Charlotte’s Web.

Let’s set the scene. Many Jews living in and around Jerusalem in the first century were there because their ancestors had returned to the homeland centuries before following a period of exile in far-off regions. These residents, including Jesus and his disciples, spoke mainly Aramaic, the Lingua Franca of Palestine at the time. Others had moved to Jerusalem more recently, bringing with them whatever foreign tongue they had acquired over centuries of living in Libya, Egypt, Asia, or elsewhere.

These dynamics of migration and settlement would have lent Jerusalem a richly cosmopolitan atmosphere, a blend of cultures and languages similar to what we’d see in any major city in our country today. Houston is a close example. Nearly 150 languages are spoken there, with a third of its residents going home to speak a language other than English. As is true in our experience, in Jerusalem this multi-cultural, multi-language, old/new dynamic would have created tensions. Home crowd: “We got here before you did, so don’t even think about changing the arrangement of things.” Recent arrivals: “Just because you were here before we were doesn’t make you better. We’ve got some ideas, too, about the arrangement of things. In fact, they’re a little bit different from what is here now.”

Suddenly walls of separation, suspicion, and stereotypes are going up before relationships can ever be kindled or fostered, while bridges of curiosity, interest, and shared projects never get beyond the design table. Friends, I am deeply saddened, and I know you are too, to be describing a cultural climate that’s become painly familiar to us.

Pentecost is a grand and fundamental reversal of that us-versus-them impulse. Those belonging to the home crowd are speaking not just freely, eagerly, to the newcomers. Not only that, they’re addressing them in each of their respective languages. They are effectively saying not “Come and be like us and we’ll consider letting you in the club.” But rather, “There is no club; only a community of any and all comers; we welcome you the way we were welcomed by Jesus of Nazareth; all of us belong—you no less than we.”

As we follow the story of Acts from this moment, we will witness the Holy Spirit opening one channel of cross-communication after another in the growing community of Jesus’ followers, bridges replacing walls as the primary construction project. Differences are seen as a challenging gift—which they are always—but a gift no less. Variety and diversity blossom in these pages: There are Jews and Greeks; men and women; simple and sophisticated, the birthrighted and the banished. Annie Dillard was surely reading Acts when she determined that “God loves pizzazz.”

Latasha Morrison has written a book called Be the Bridge that’s been important to me this year. I recommend it to you. Written from a Christian perspective, it’s about the challenge and hope of bridging racial and ethnic divides. I think what she says applies to divisions of any sort—racial, ethnic, political, economic, gender, sexual identity; religious opinions, spiritual temperaments, Enneagram numbers. She writes, “We have to love despite our differences.” But we knew that part. It gets better. But more than that, we have to love “because of our differences.” Think about that for a minute: loving someone because of the ways they are not like us.

Do you love anyone in such a way? Do you ever seek out people who hold different perspectives, bringing with you not just your own perspective but genuine curiosity and interest in theirs, listening as much as speaking, even borrowing from their own language and ideas in the sharing? That sort of cross-communication isn’t easy, is it? Even with those we totally love, committed to loving, it isn’t easy. I once paid a visit to the home of an elderly couple that had been married over sixty years by then. It was marvelous. I sat at their kitchen table and above their kitchen table hung a framed needlepoint cloth that read, “Our marriage was made in heaven. So are thunder and lightning.”

Cross-communication isn’t easy, but it is what love looks like, what following Jesus requires of us. In our marriages, our friendships and courtships, our work setting, our casual encounters, our congregation, and our public life. On Pentecost Jesus’ followers, the men and women who are part of the home crowd get beyond any reservations they feel and share the good news in every direction, every tongue, indiscriminately: you belong; we all belong—old-timers, newcomers, liberals, conservatives. Suddenly pigs are talking to spiders; donkeys with elephants as Pentecost bridges every difference in ethnicity, geography, culture, politics, age, stage. Even time.

Tomorrow marks the 283rd anniversary of an event that was to define Methodism forever as a church centered in cross-communication by the grace of God, finding our way to love everyone. On May the 24th, 1738, while attending an evening service of teaching and worship on Aldersgate Street in London an Anglican priest named John Wesley suddenly experienced a deep sense of God’s love and forgiveness. “I felt my heart strangely warmed,” he wrote in his journal afterward. In the following weeks and months this priest who shared the deeply held belief that all religion happened within the walls of a church building and nowhere else, was transformed into an open-air evangelist preaching his sermons to hundreds—sometimes thousands.

He preached to long-time Christians and the uninitiated, gentry and peasant, miners and millionaires, going anywhere and everywhere, a quarter of a million miles on horseback—fathom that—by the end of his life, to share the good news of God’s love and grace, mercy and welcome to all in Jesus Christ. In the process he founded the Methodist church. Aldersgate, it turns out, was his Pentecost. Our Pentecost.

In the year of Covid, there has been so much uncertainty. I don’t need to tell you that. We went through it together. And emerging from a Covid year has held its own host of uncertainties. You know that too. The English novelist, Margaret Drabble, gives us a very gospel way of seeing opportunity and promise in such uncertain times. “When nothing is sure,” she writes, “anything is possible.”

Yesterday, just yesterday, we felt something of that “anything is possible” at the meeting of our church’s Administrative Council—some of you were there. There was such creativity, energy, and imagination; there was lots of “let’s reach out,” “let’s welcome,” “let’s partner,” “let’s build some new bridges between us, and beyond us into the community.” It was a promising day, approaching Pentecost.

Luke tells us that the men and women who were filled with the Holy Spirit that day, suddenly gifted with language not their own, hands extended in welcome toward these newcomers in welcome and respect, made-up minds set aside in favor of the possible anything; Luke says they told them that day about the mighty work of God. What was the mighty work of God? Maybe that was.